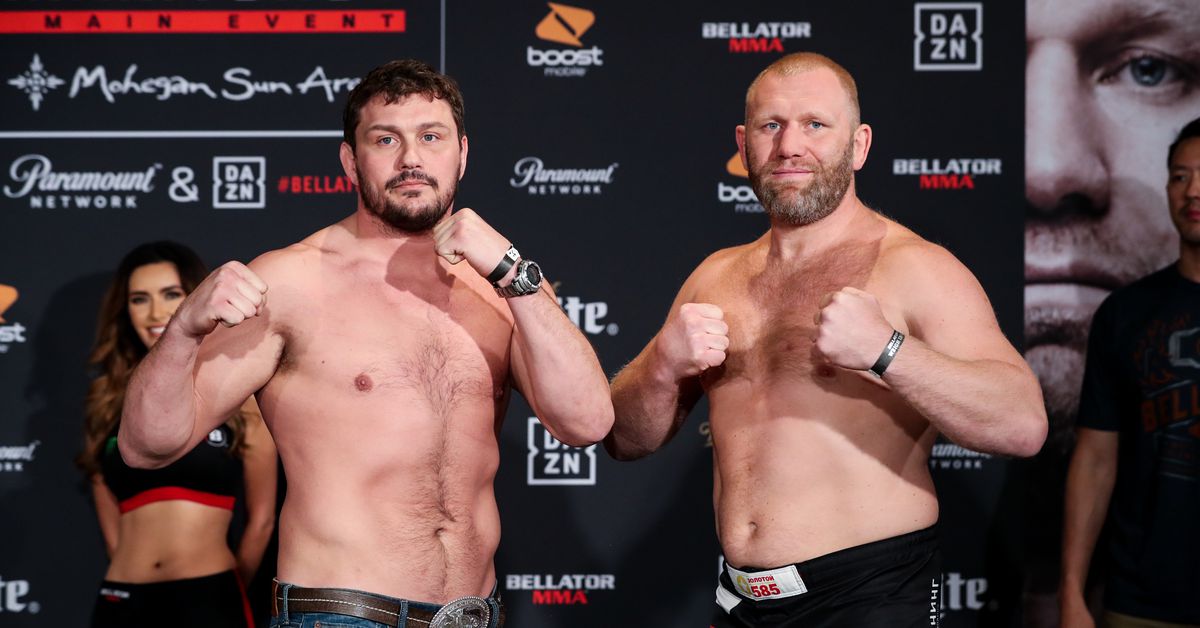 Bellator 225: “Mitrione vs. Kharitonov 2” aired last night (Sat., Aug. 24, 2019) on Paramount Network from Webster Bank Arena in Bridgeport, Connecticut. After their first fight earlier this year ended in only 15 seconds, Matt Mitrione (13-6, 1 NC) and Sergei Kharitonov (29-7, 2 NC) decided to run it back again and hopefully have a bout without a “No Contest” result.

Mitrione was providing forward pressure, steadily attacking with hands and leg kicks, but whenever Kharitonov landed a clean shot Mitrione’s mouthpiece went flying. Referee Dan Miragliotta became so frustrated he warned Matt that he’d take a point the next time it came out. R1 ended without further incident.

If the lack of a proper mouthpiece can be said to cost a man a fight, it certainly did in round two. Mitrione was trying so hard to keep it in he wasn’t making the amount of forward progress he did in round one, so Kharitonov was able to stand and bang right in the middle. A right hook knocked the mouthpiece out again, an uppercut dropped him, and a couple of hammerfists on the ground finished it at 1:24 for Kharitonov by TKO. An interview by John McCarthy followed asking him about said mouthpiece.

“It didn’t frustrate me at all. At heavyweight, even one hit decides everything. With every fight my uppercut is going to become stronger and I will show everyone better fights.”

It didn’t take long from Minakov to return to his former form as he rocked Johnson with a hard right hand, then put him away with another right and left as he slumped against the cage for a KO at 1:45 of the first round.

A reinvigorated Minakov spoke to “Big” John McCarthy about his big win in Bridgeport.

“Good evening USA, good morning Russia. I always have a combination, I didn’t have a chance to show you against Cheick Kongo, but I always practice it in my training camp. I was preparing a long time for this fight and I came here for this fight so I accept the (late replacement) fight. Thanks God I got a southpaw opponent.”

The result was just as lopsided as their records, with Lara ultimately finishing the fight when Turner gave up her back in full mount and Lara repeatedly pounded her in the head with unanswered lefts. The official time was 3:44 of R1 and Lara spoke to John McCarthy next.

“I feel really great. I was working for this. I wasn’t expecting less than this. I feel that I’m good in 125 but I was great in this weight.”

Rickels tried an unorthodox forward motion with his stance, but Amosov just tagged him with the left hand and took him down for some ground and pound. Rickels got up at the four minute mark and was taken right back down again. Easily a 10-9 round for Amosov.

Rickels tried and failed to get a fast start in round two, but all his forward progress just left him off balance for another takedown. Amosov slowly and methodically improved position on the ground. When he finally had the spot he wanted, he applied the d’arce choke and forced Rickels to tap for the first time in his career at 4:02. A John McCarthy interview (via a helpful translator) followed.

“Hello everyone in the USA. It was not my first and not my last submission. I was preparing for this. I’m looking forward to fighting the winner of that (Grand Prix) and it will be very cool for me. I am grateful for everyone.”

Getting back to the big boys two more undefeated fighters put their records on the line as Tyrell Fortune (6-0) and Rudy Schaffroth (6-0, 1 NC) mixed it up. Schaffroth provided the forward pressure in round one, but Fortune wasn’t bothered by the advancing foe, targeting his legs with heavy blows. Those attacks were Schaffroth’s undoing in round two as he was already vulnerable and stumbled on another kick, leading to Fortune blasting him with a big right hand, pounding away on the ground, then sinking in the rear naked choke at 2:08.

The still undefeated Fortune spoke to “Big” John McCarthy after the fight’s conclusion.

“I just stuck to the game plan. It’s hard being out eight months. I had to come here get some rust off and get back in the groove. I’ve been working on that rear naked choke a lot with Bader. The first time (I hit his head) I thought I broke my hand but the heat went down so I kept throwing.”