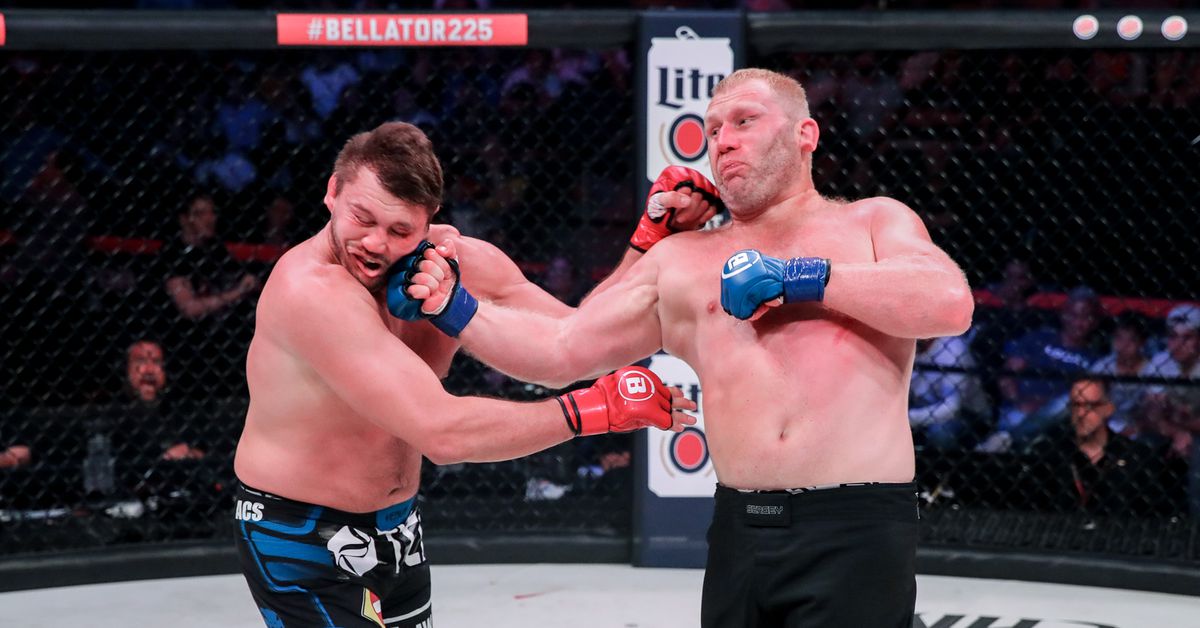 It was a night of finishes at Bellator 225, with all 14 of the bouts ending without the use of the judges. But despite the great night of action, all the talk coming out of Bridgeport, Conn. will be about a mouthpiece.

In the main event of Bellator 225, Sergei Kharitonov and Matt Mittrione finally ran back their fight from February which ended in a no-contest following a low blow from Mittrione that rendered Kharitonov unable to continue. This time around, Kharitonov stopped Mittrione with strikes in the second round but while there was a clear resolution to the fight, the circumstances surrounding the finish still left something to be desired, as a dysfunctional mouthpiece played a pivotal role in the ending.

Mittrione was having success in the first round of the fight, pushing Kharitonov backwards and just generally dictating the action of the fight. But midway through the round, Mittrione began having issues with his mouthpiece, which kept falling out. After the third time his mouthpiece fell out, referee Dan Miragliotta warned Mittrione that if it happened again he would have to take a point. Mittrione tried to argue that this was a new mouthpiece but Miragliotta wasn’t having any of that. During the break between rounds, Miragliotta again told Mittrione and his corner that he needed to keep his mouthpiece in and Mittrione even told his cornermen that he had another one in his bag but Mittrione’s corner was more concerned about trying to get their fighter to refocus on the bout. Turns out, that may have been a mistake.

Not too long into the second round, Mittrione was grazed by a check right hook from Kharitonov that knocked his mouthpiece out again but before Miragliotta could intervene, the visibly frustrate Mittrione stepped in on Kharitonov who dropped him with an uppercut. A few follow up shots later and Mittrione’s mouthpiece troubles, and the fight, were over. Kharitonov is not unbeaten over his last eight bouts and has prime position for the next heavyweight title fight.

In the co-main event, Vitaly Minakov successfully rebounded off the first loss of his career by turning in a highlight reel knockout of Tim Johnson. Minakov stunned Johnson with a right hand that had the American reeling and then Minakov turned out the lights with a a combination that left Johnson slumped unconscious against the cage. The win moved Johnson to 22-1 and has him right back in the thick of the heavyweight title picture.

In the only women’s fight of the evening, Alejandra Lara get back on the winning track, stopping Taylor Turner with ground and pound in the first round. It was a pretty formulaic victory for Lara who was able to get top position against Lara without issue. From there Lara postured up and started raining punches that hurt Turner and eventually caused the referee to step in in the first round. The win moves Lara to 2-2 in the Bellator cage while the loss drops Turner to 1-1 in Bellator and 4-6 overall.

In a 175-pound catchweight bout, Yaroslav Amosov kept his undefeated record in tact by becoming the first person so submit Dave Rickels. Though Amosov had plenty of success on the feet, he continually took Rickels down and worked Bellator’s most prolific fighter over from top position. In the second round he was finally able to end the fight by locking up a D’Arce choke. The win moved Amosov to 22-0 and announced his arrival to the very top of the Bellator welterweight division.

In the main card opener, Tyrell Fortune kept rolling with a rear-naked choked submission over Rudy Schaffroth. Schaffroth and Fortune actually had a history together, having been high school wrestling teammates, and Schaffroth is even currently a training partner of Fortune’s twin brother but all that insight didn’t seem to help as Fortune hurt Schaffroth on the feet before submitting him in the second round.

The preliminary bouts for Bellator 225 were especially exciting, featuring a number of slick submissions and sensational knockouts. Key highlights from the undercard include, Khonry Gracie and Austin Vanderford both picking up wins, and hot prospect Mike Kimbel getting upset by Chris Disonell. Also, Aviv Gozali also set a Bellator record with a 11-second heel hook submission. Then in the final prelim bout, Nick Newell made a triumphant Bellator debut picking up a first-round submission win over Corey Browning.