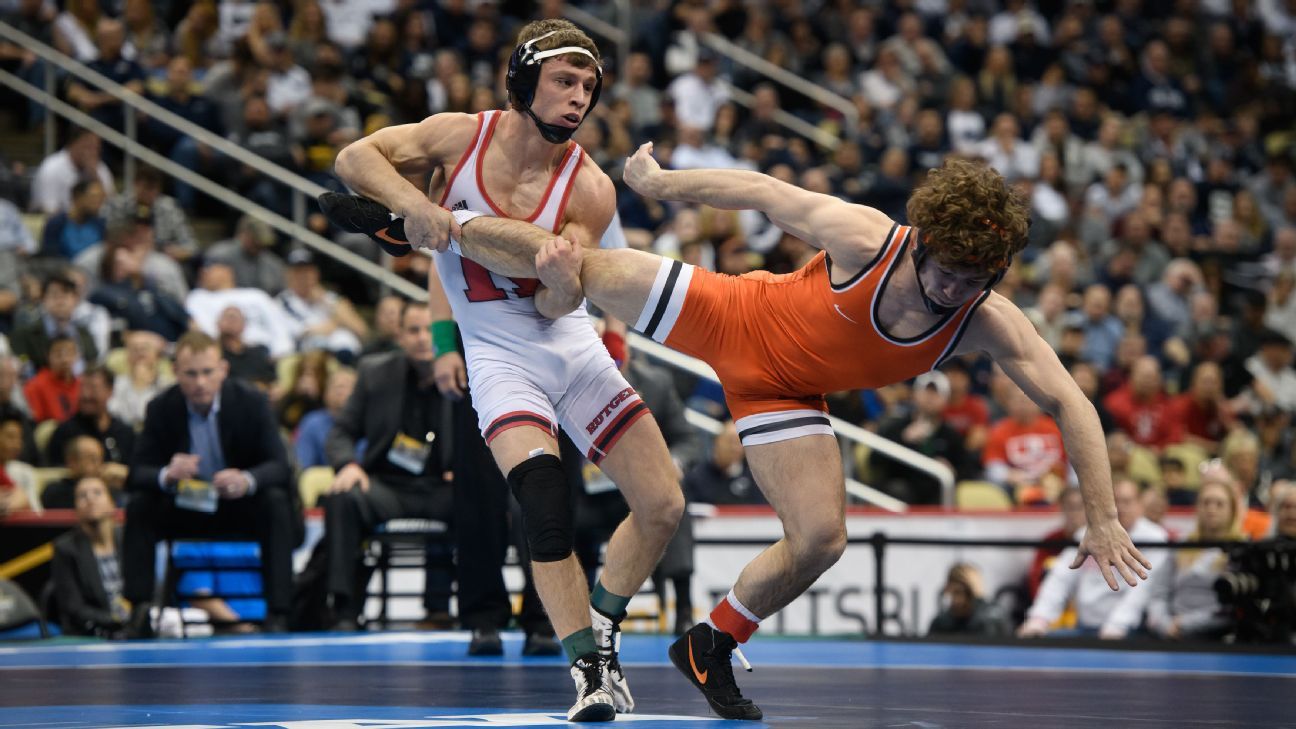 PITTSBURGH — This is his home, and these are 18,000 of his friends, so Ben Askren doesn’t hesitate when he sees a pocket of open seats.

“Are these taken?” he says to three middle-aged dudes in Iowa State gear.

The strangers immediately recognize Askren — the UFC star and former Missouri All-American wrestler — but they barely look up from the eight matches below. Here at the NCAA wrestling championships in mid-March, Askren is an A-list star, but he’s like a famous person at his own family reunion — so popular and well-known that nobody really bothers him for selfies or introductions. He’s just good ol’ Uncle Ben walking around.

The Iowa State fans wave for him to come on in and have a seat. One guy squishes his legs to the side, craning his head past Askren’s body so he doesn’t have to miss a single second of the wrestling below.

Askren offers an important window into the latest evolution in the sometimes delicate relationship between wrestling and MMA. It’s long been accepted that there is no better base for MMA success than wrestling, and more specifically, American folkstyle wrestling.

For just one small snapshot of the impact of college wrestling, scroll through the NCAA brackets from Askren’s junior season in 2006. That tournament featured Askren, Johny Hendricks, Phil Davis, Chris Weidman, Ryan Bader, Cain Velasquez and Gregor Gillespie, to name just a few. That means there is a very good chance that on those eight mats down below Askren, the next wave of elite MMA fighters is probably rolling around.

But 15 years ago, when Askren was starting his illustrious Missouri and international wrestling career, many in his community thought MMA was a violent corruption of their craft and only begrudgingly accepted that it was a new career path for the best wrestlers.

“That was still the dark ages of MMA,” Askren says.

Times have changed. At NCAAs this year, wrestlers, coaches and fans were almost unanimously supportive of the sport. Part of that is the post-grad opportunity it presents.

Askren says even during a heyday of U.S. international wrestling, with an uptick in new wrestling jobs popping up in regional training centers across the country, there still are very few professional tracks for college wrestlers. And almost none that would pay like MMA does.

“Look up what I made for my first UFC fight,” Askren says. (He got a base amount of $350,000 for his debut against Robbie Lawler in March.) “It took me a while to get there, but that is a higher ceiling than you’ll find in wrestling.”

Bo Nickal, a Penn State senior and one of the best American college wrestlers to ever put on a singlet, understands what could be ahead. He would eventually close out that weekend in Pittsburgh with a third NCAA title and instant legend status. Nickal and his family offer a perfect window into how dramatically the relationship between MMA and U.S. amateur wrestling has changed over the past 10 years.

He says it as though MMA is the obvious next choice, like a law school graduate passing the bar and saying he’ll probably be a lawyer. The casualness in his voice is important. Even though it’s still a tough choice for great wrestlers to leave international wrestling and skip the coaching path, Nickal is one of the many wrestlers at NCAAs who spoke of MMA as an exciting next step, not some devastating breakup they needed to initiate in order to pay the mortgage.

A few minutes later, his teammate, NCAA heavyweight champ Anthony Cassar, says he too wants to pursue the 2020 Olympics and will transition to fighting after that.

“I grew up watching Fedor Emelianenko and Vitor Belfort as a kid,” Cassar says. “It’s one of my goals, and I’m going to immerse myself in it someday.”

MMA, though, is not for the faint of heart, even by the Nickal family standards. Nickal’s dad, Jason, is a lifelong wrestler and longtime coach who played football at Chadron State. His mom, Sandy, is a former San Diego State basketball player who went 5-0 as an amateur boxer, training out of Jackson Wink MMA in New Mexico. She used to take Bo to the gym when she’d spar, and she says he won the one jiu-jitsu tournament he participated in as a kid. Nickal is Exhibit A of this generation of college wrestler — not only is MMA a mainstream part of his life, it’s part of his entire family.

But still: Nickal could end up eating elbows, or getting kicked in the face, or choked out …

His mom interrupts. “That’s what doctors are for,” Sandy says with a wave of the hand.

Northwestern wrestler Sebastian Rivera tried to duck into his family’s house this summer without his dad noticing his brand-new broken nose. But it was only a matter of time until the star 125-pound wrestler was busted: He’d been sparring with former UFC lightweight champion Frankie Edgar, an old family friend of the Riveras, and Rivera hadn’t seen an Edgar knee heading north at breakneck speed. Suddenly, out came the blood.

Rivera says his parents, especially his dad, Steve, worry about his fascination with MMA. His dad is a wrestling lifer and coached Edgar back in the day at Toms River High School in New Jersey. Rivera spent his youth running around the wrestling room, hoping to be just like Edgar someday. That has extended to Edgar’s MMA career — Rivera fully intends to follow in his UFC footsteps once wrestling is over.

Of all the wrestlers interviewed in Pittsburgh, Rivera had the most MMA training on the side. The majority still said they watched on TV and dabbled in occasional armbars and boxing sparring, but nothing serious. Rivera, though, works hard, especially with Edgar, on jiu-jitsu and striking, and when he talks MMA strategy, he already sounds like a UFC veteran. He struggled at first to adapt to working off his back — that’s the biggest nightmare position in a wrestling match — but has adapted to it and now prefers to work submissions off his back.

“I will wake up at 8 a.m. in the summer and just go and grapple and get punched in the face all day,” Rivera says. “I love it. I want to fight, ultimately, and Frankie wants me to do it.” His parents will take some convincing, though. He says they just don’t want to see him get hurt, like he did that day with Edgar.

“I’m gonna send you back to Northwestern for the summer,” he says his dad told him.

“I will wake up at 8 a.m. in the summer and just go and grapple and get punched in the face all day”

Rivera isn’t the only one with an Edgar connection. When Rutgers coach Scott Goodale took the Scarlet Knights gig in 2007, he immediately made Edgar, a former Clarion University wrestler, one of his assistants. Edgar got his first UFC fight that same year, but he continued to coach and use the Rutgers wrestling room as a way to keep his grappling sharp. Goodale admits he was lukewarm at first but got drawn in over the years, mostly because of Edgar. But he also loved seeing elite wrestlers have a new way to make a living using wrestling.

“This is what young wrestlers are watching as they grow up,” Goodale says. “And that’s a good thing for the sport.”

That kind of open-mindedness is certainly benefiting Rutgers, which crowned the first two national champions in school history at this year’s NCAAs. One in particular, Nick Suriano, seems especially intrigued by joining the wrestler-turned-fighter crowd.

“I’ve been doing it off and on since high school,” Suriano says. “I’ve worked out with Frankie and really enjoyed it. It’s funny. MMA and wrestling are both fights. And I love to win the fight.”

After winning his national title on March 23 in Pittsburgh, Suriano, a junior, meanders around the floor of the PPG Paints Arena, posing for a relentless stream of photos, one after the other after the other. He has a nice-sized gash above his eye that looks like it’s a gentle breeze away from opening up and bleeding all over. It’s tiring just to watch the constant insta-smiles and handshakes and head nod, then someone is standing there waiting for the next one. It’s a dizzying scene, and Suriano has clearly lost track of who’s asking for what.

But he’s not hustling to get away, either — he is reveling in this moment. The 133-pounder is a bit of a showman, taking acting classes and never shy about riling up rival crowds when he’s on the mat.

When one man in his mid-20s asks for a photo, the latest in an assembly line of selfie-seekers, Suriano starts to smile and stands beside the guy as a phone camera snaps away. He doesn’t even notice who’s asking for the shot until the guy speaks.

“Congratulations, champ, that win was all heart, all mindset,” the guy says as a friend takes photos.

There’s something about the man’s voice that causes Suriano to pause and really look at his new biggest fan: It’s Henry Cejudo. “Thanks, champ,” Suriano says. Then Suriano gets out of the picture and asks to take a shot of Cejudo, the UFC flyweight champion and 2008 Olympic gold medalist wrestler, for himself.

In that moment, it’s not hard to already see the Cejudo vs. Suriano UFC PPV promo video. Maybe one of those photos is on the screen, with the voices of the two champion wrestlers in the background, talking up a chance to punch each other in the face. One generation of star wrestler versus another.

As Askren watches the bouts happening in front of him, he smiles when he’s asked which five wrestlers might be great future fighters.

“I can’t name five,” he says. He pauses for effect, then finishes his thought: “Because all 330 guys here could be great fighters. That’s how good the wrestling base is in the fight game.”

And here’s the really scary thing derived from Pittsburgh, a point that Askren agrees with: This generation of wrestlers has grown up with UFC fights and fighters as a mainstream part of their lives, with MMA training facilities right around the corner from their houses. Which means, as good as the Daniel Cormiers and Ben Askrens of the MMA world have been, there is a 2.0 version of those great ex-wrestlers who aren’t just adding on punches and kicks when their careers are over.

“Bo Nickal absolutely, in a heartbeat, could be great,” Askren says. “The one thing I would tell him is, don’t wait too long. No matter how good wrestlers are, it’s gonna take them two or three years to get to a big show — maybe even longer because people don’t want to fight good wrestlers. As good as he is, it’s not looking real rosy for him to beat the other top American Olympic candidates. In my opinion, he’s not beating those guys.”

If Askren is right, that means Nickal would perhaps have a crossroads decision to make next year: Keep chasing international wrestling, or try his hand at MMA?

“It’d be a shame if he doesn’t get to wrestle in the Olympics,” his mom says. “But I don’t have any doubts about how well he’ll do in a cage fight. It’ll be bad for that other guy.”