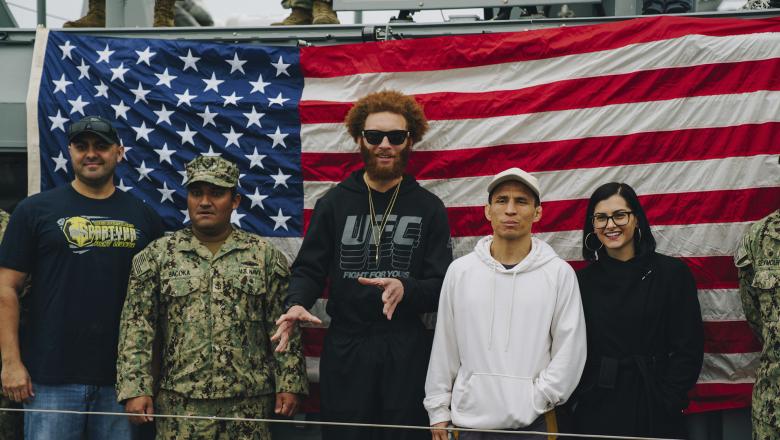 The athletes were taken onto one of the ships and given a breakdown on what day-to-day life is like for the crew, and then they were taken to a workout facility where service members train in an indoor pool that features a difficult obstacle course above.

For each athlete, the visit hit close to home. While Benavidez said he didn’t have much experience around a Navy base growing up, his brother-in-law serves in the military, something in which Benavidez said he takes great pride.

Pena, on the other hand, has multiple connections to Norfolk, in particular.

“I want to say back in 2013, I came out here and stayed with my mom for the summer,” Pena said. “She’s a chief for the Navy. And now, she’s stationed out at Sacramento. But little did I know, my biological dad is out here, as well, so it’s been pretty cool.”

UFC 249: What a Tony Ferguson vs. Justin Gaethje main event might look like
Photo | Paige VanZant poses nude with husband Austin Vanderford
Khabib Nurmagomedov reacts after Tony Ferguson calls for him to be stripped of his belt
Valentina Shevchenko out of UFC 251 title fight due to injury
From feared enemy to ‘sweetheart,’ Brock Lesnar stories from those who know him