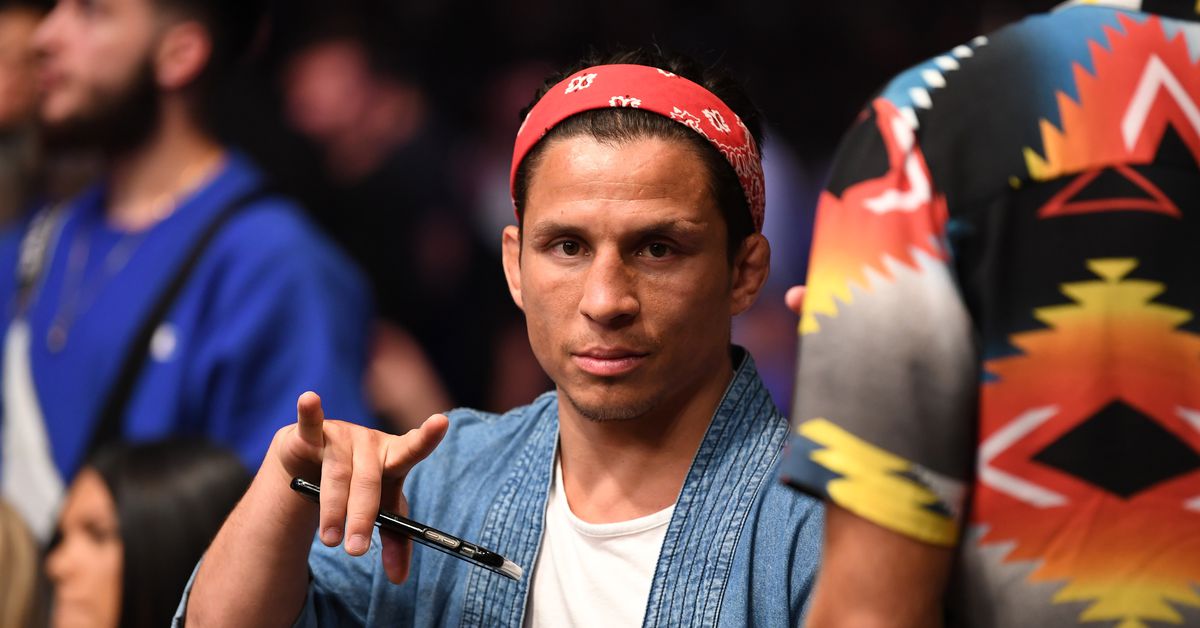 Will Joseph Benavidez become the new flyweight champion? Or will the too-heavy Deiveson Figueiredo prevail and keep the 125-pound title vacant? We’ll find out in the UFC Fight Night 169 main event, airing exclusively on ESPN+ this Sat. night (Feb. 29, 2020) from inside Chartway Arena in Norfolk, Virginia.

The UFC Fight Night 169 co-headliner will feature the featherweight contest between the unheralded Zarah Fairn and Invicta Fighting Championship import Felicia Spencer. Not much to say about this showdown other than a Spencer win is badly needed because the 145-pound division is starved of title contenders.

Before we get to the main and co-main event breakdown, be sure to check out the complete UFC Fight Night 169 preliminary card breakdown, expertly deconstructed by the jet-setting Patrick Stumberg here and here. Fighter-turned-writer-turned-fighter again, Andrew Richardson, did most of the heavy lifting for the rest of the main card right here. For the latest odds and betting lines click here.

The was a straightforward fight — and a pretty good one, to boot — until Deiveson Figueiredo blew up the scale and got himself disqualified from title consideration. The Brazilian will pay a 30% fine and still compete, but he won’t be taking home the title with a victory, nor will he be eligible for a post-fight bonus. There are also two ways to look at the ramifications of his scale fail: did he deplete himself so badly in an attempt to make the championship mark that it will serve as a detriment to his fight night performance, or did he not work that hard during the weight-cutting process and remain both heavy and at full strength? It sucks that we have to even debate this because I was expecting a five-round war.

We may still get it, as Benavidez is the kind of veteran who has already seen and done it all. He’s also faced the best in the world in two different weight classes, having previously tangled with Dominick Cruz, Demetrious Johnson, and Henry Cejudo, just to name a few. There is absolutely nothing Figueiredo can offer that “Joe Jitsu” hasn’t already seen at some point in his storied combat sports career. In addition, Benavidez is a complete fighter and technically proficient wherever the fight may go. Figueiredo is no slouch himself and one of the most prolific finishers at 125 pounds, though his decision loss to Jussier Formiga took away some of the mystique, regardless of how many excuses “Daico” had to justify it. Yes, that’s the same Formiga who got put down by Benavidez last June.

Benavidez had his own tough loss back in 2018, but dropping a split decision to Sergio Pettis is more forgivable when you consider it was his first fight in nearly two years after shredding his ACL. Since then, “Joe Jitsu” has been perfect in three fights, two of which ended by way of technical knockout. Suggesting Figueiredo has a “puncher’s chance” would, by inference, also suggest the Brazilian is only a puncher (he’s not). Benavidez is likely to make him look like one with a punishing ground attack that will neutralize most of what “Daico” has to offer. But he also has to finish the fight — or survive 25 minutes against one of the most devastating chin checkers the flyweight division has ever seen.

This should be a very exciting fight.

Felicia Spencer vs. Zarah Fairn seems like an unworthy choice for a UFC co-main event, particularly under a championship headliner, when you consider the featherweight hopefuls only have a combined three fights inside the Octagon. I guess the simplest explanation is that matchmakers want a Spencer victory they can market as part of the rebuilding of the 145-pound weight class. Amanda Nunes currently holds the division title and the only other viable contender in the absence of Cris Cyborg is fellow UFC Norfolk competitor, Megan Anderson.

“FeeNom” will face a tough but wholly unremarkable kickboxer in Fairn, who was submitted in the opening frame of her UFC debut against the aforementioned Anderson. Prior to that, “Infinite” bounced around the International circuit opposite talent you would expect to find overseas, like the 3-5 Kerry Hughes. If we’re being real for a minute, Fairn would probably not have gotten an invitation to UFC had the promotion not been so desperate for featherweight talent. To wit, it can’t even muster up enough names to list a Top 15 in the (cough) “official” UFC rankings.

There isn’t a lot of analysis to be offered here. Spencer is a younger, more dynamic fighter with great wrestling and a suffocating clinch game. We also saw her chin hold up against the bludgeoning power of Cris Cyborg, so this idea that Fairn can lumber forward and land the one-hitter quitter seems unrealistic. Expect Spencer to use her athleticism against her one-dimensional opponent in what should be a relatively quick fight.

Remember to get the rest of the UFC Fight Night 169 main card predictions RIGHT HERE.

For the rest of the UFC Norfolk fight card and ESPN+ line up click here.